Hi punx, just a quick update since we disappeared from here for a while.
We had a great time at Fluff, it’s been maybe the best show in our life as a band, full of friends and supporters from all over Europe.
We don’t have enough space to write thank you for that amazing night, so just enjoy the complete coverage of our set 🙂

After that we played for our first time in Bari and it’s been great too!

Next stop will be in Roma, wher’e playing at Go! Fest V on the 17th of october, together with other amazing bands like Needful Things, Sanitys Dawn, Whoresnation, Sheeva Yoga, Anti You and many others. Be sure to be there!

Last but not least, check our bandcamp’s merch section, the compilation “Spazzin’ to the oldies – A tribute to Spazz” and  “Crash Mandolino 2.0 aka Italia Violenta” are out and we got few copies for you! 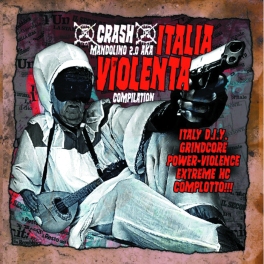 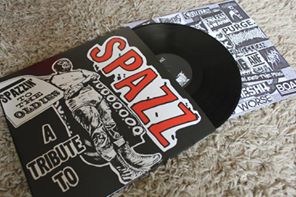 Hey punks, here’s the big new you were waiting for: xKATExMOSHx will be playing at Fluff Fest on saturday 25th of July in the Play Fast or Don’t stage, at 22:00.
It’s going to be a great moment for us, the stage will be  full of great bands of friends like Controlled Existence, Sick Gore Suffer, Flummox, Doomsisters, Sickmark, Klutz, Barney Gumple!
Make sure you’ll be there! 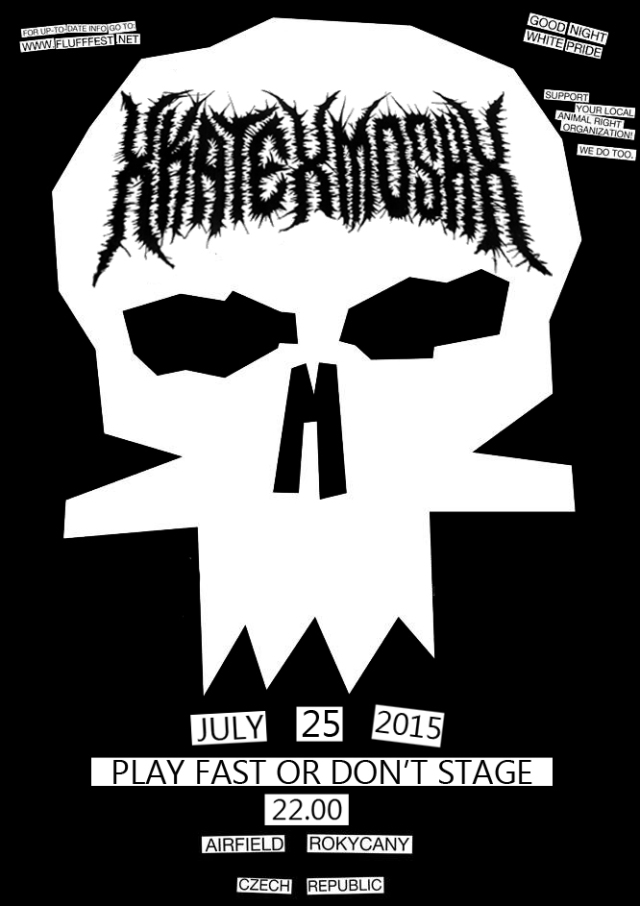 Blastbeats over Italy on line!

The day has come, Blastbeats over Italy is finally on line on Bad Feeling Records bandcamp.
Listen, enjoy and preorder there or contacting us!

If you want to listen just to our songs (but you’d miss some great music!), here’s the direct link to oour bandcamp!

Time for compilations and tributes!

Looks like all the compilations we decided to took part in the last months decided to go on line in the same period, so maybe it’s a good idea to sum everything here in a post for anyone who don’t want to lose all our efforts 🙂

First of all, here’s the complete “Spazzin To The Oldies – A Tribute To Spazz” compilation, featuring great bands and great friends too. We recorded “Dewey Decimal Stitchcore” for it

The second one is our personal tribute of one of our favourite bands of all time, Capitalist Casualties, you can find it Operation Grindcore vol III. No words needed, if you’re into grindcore, powerviolence and stuff you’ll surely know Vii Caso and his great blog

Last but not least, we’re also in Violence Vol. 4 by The Death Of A Modernist, compilation with 70 tracks of bands from all over the world. We’re just in the middle, hope you find us 🙂

That’s all for now, enjoy! 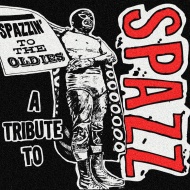 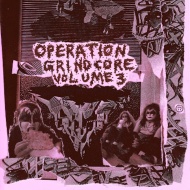 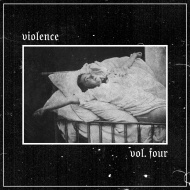 Minitour in a few days!!

Ehi punks, just a few days and we’ll be on the road again, come and say hi at one or more of these shows! Go powerviolence! 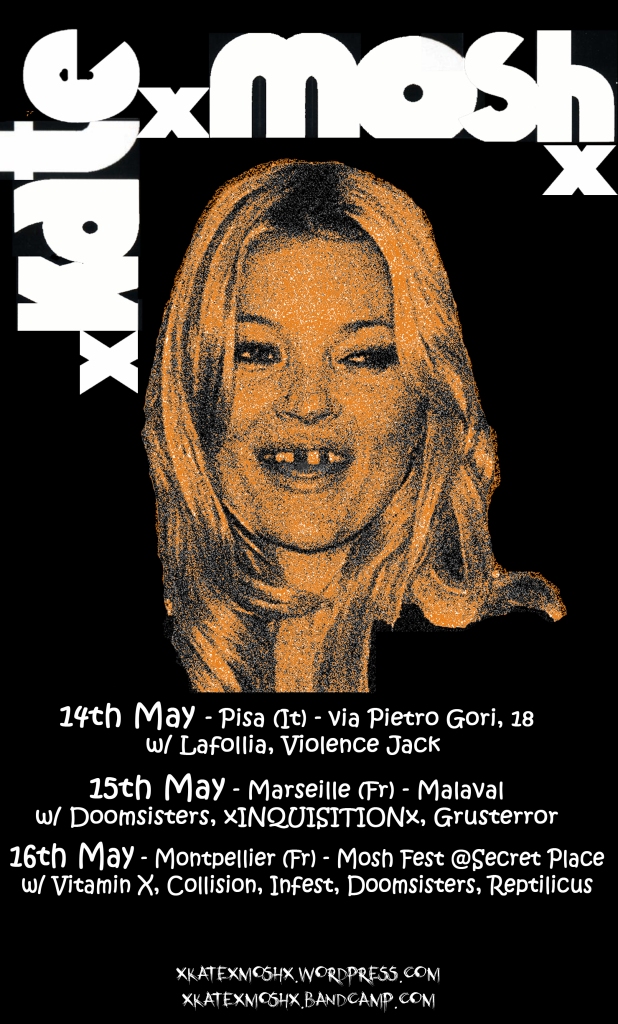 Hey punx, we just put on our bandcamp our cover of Dewey decimal stitchcore. It’s going to be part of the tribute “Spazzin to the oldies”, out soon on 12” and tape!
Hope you enjoy it!

A violent afternoon on the 25th of April

25th of April is an important date for Italy. We celebrate the liberation from the fascist scum and nothing  can be better than a show to celebrate it!
So, if you’re in Roma, see you at Malatempora pub! 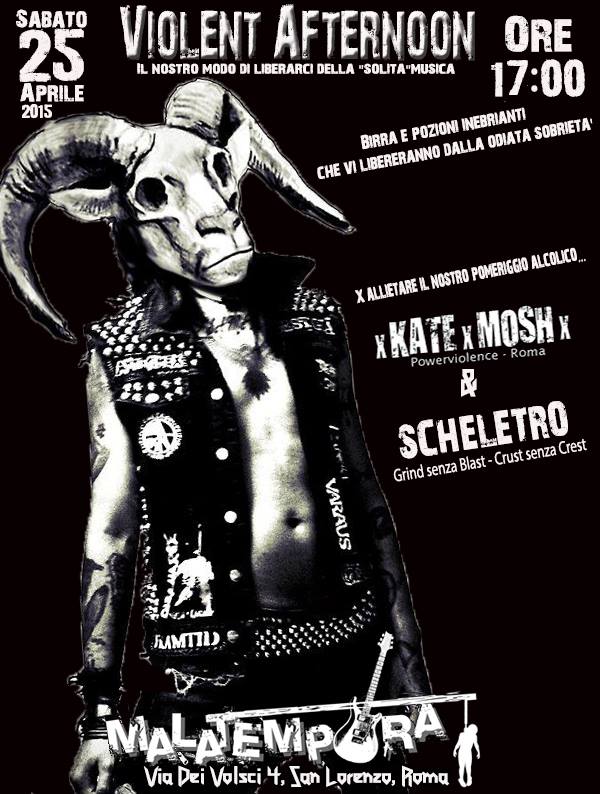 We’re very close to have our tracks we recorded a few days ago done. As you maybe remember they will end on “Blastbeats over Italy – Italian powerviolence 2014-2015”, the 13 way split that will be in the pressing plant in the next days  and is going to be released by our guitarist’s label Bad Feeling Records.
Here’s the list of the band included: Always Never Fun, Burst Up, CIB, Corpse, Double me, Extreme Vandamme Terror, Fracture, Humbaba, Repulsione,  Stanley_Ipkiss, xDELOREANx, xHANSOLOx.
We recorded  also 2 covers, one from Spazz for the tribute “Spazzin to the Oldies – A Tribute To Spazz”. The other one is kept secret so far,  who knows  where it’ll end.
Here you can se a preview of the artwork of the megasplit 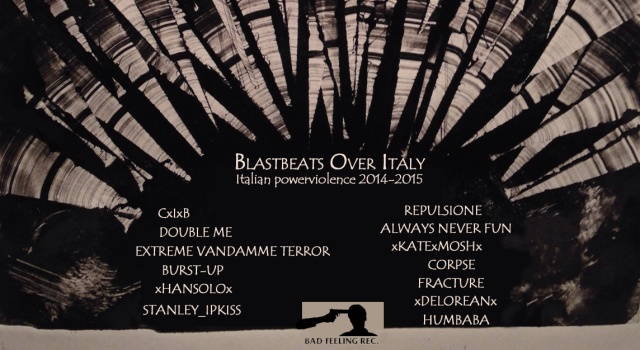 About shows, we’re getting many requestes and we’re organizing to play as much as we can around Europe, you can bet we have surpprises for you!
In the meantime, see you in Padova and Modena at the end of March, we can’t wait to be there! 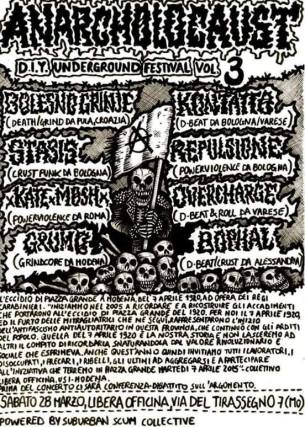 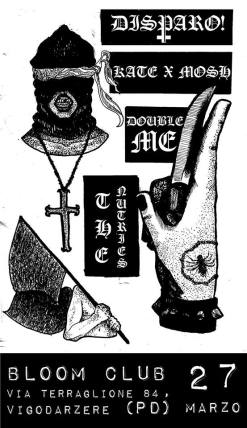 On the 7th of February we’ll be hitting again the Snakes Studio to record 5 new tracks for “Blastbeats over Italy”, a 13way split with all the powerviolence bands active in Italy now (featuring Double me, Repulsione, CIB, xHANSOLOx, Stanley Ipkiss, ANF, Burst Up, Corpse, Extreme Vandamme Terror, xDELOREANx, Fracture, Humbaba), and one cover song for “Spazzin to the Oldies – A Tribute To Spazz”.
We’ll record another cover too, you can guess if you want!
Go powerviolence!

One last but very important thing: in the last 7” we made the huge error to forget to put our friends of Frammenti Di Un Cuore Esploso in the list of the labels that produced the record. We’re extremely sorry for it and even if it’s late now we’d like to apologise and say thanks to Ivan and Francesco (the label owners) for all the help they gave us since we know each other.
Please, check their page and support them!
http://www.diysco.com/band/frammenti-di-un-cuore-esploso-records 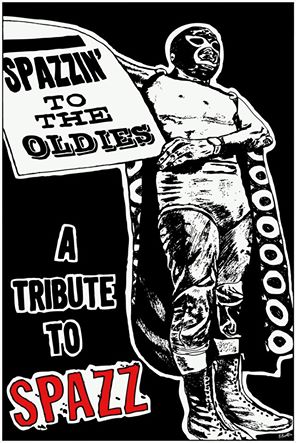 Hello friends, we really need to say thanks to all the people around that are asking for the new record! It really means a lot for us, we already were happy for it but now we’re a little more satisfied.
Sorry if some of you didn’t get your copies (we’re especially talking about our coproducers), italian postal service sucks, its rates have become higher than ever and we’re struggling to make you save money on deliveries!
After this let’s talk about SHOWS finally: we’ll be laying in Mantova and Bergamo next weekend, together with band of friends like Drunkards, Dysmorfic, In-Sight, Congegno and others too! Here’s the flyer of Bergamo! 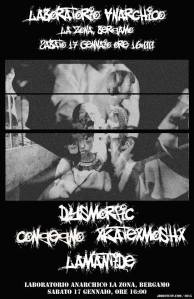 After that, we’re happy to announce that we’ve been confirmed at Mosh Fest in Montpellier on the 15-16 May, together with Vitamin X, Whoresnation, Warfuck and the french grinders Infest! And talking about festival, we’ll be playing at Grind Here Right Now in Trier on the next 21st of November, and also here the line upso far is just incredible.
We have more shows coming soon, in the meantime if you’re italian, enjoy the interview we made with Forthekidsxxx, (thanks Marco!!):
http://forthekidsxxx.blogspot.it/2015/01/xkatexmoshx.html

See you in the pit!